If you have grown up in Circleville, Ohio like I have, you know this picturesque little town doesn’t offer much.

For the third week of October every year. 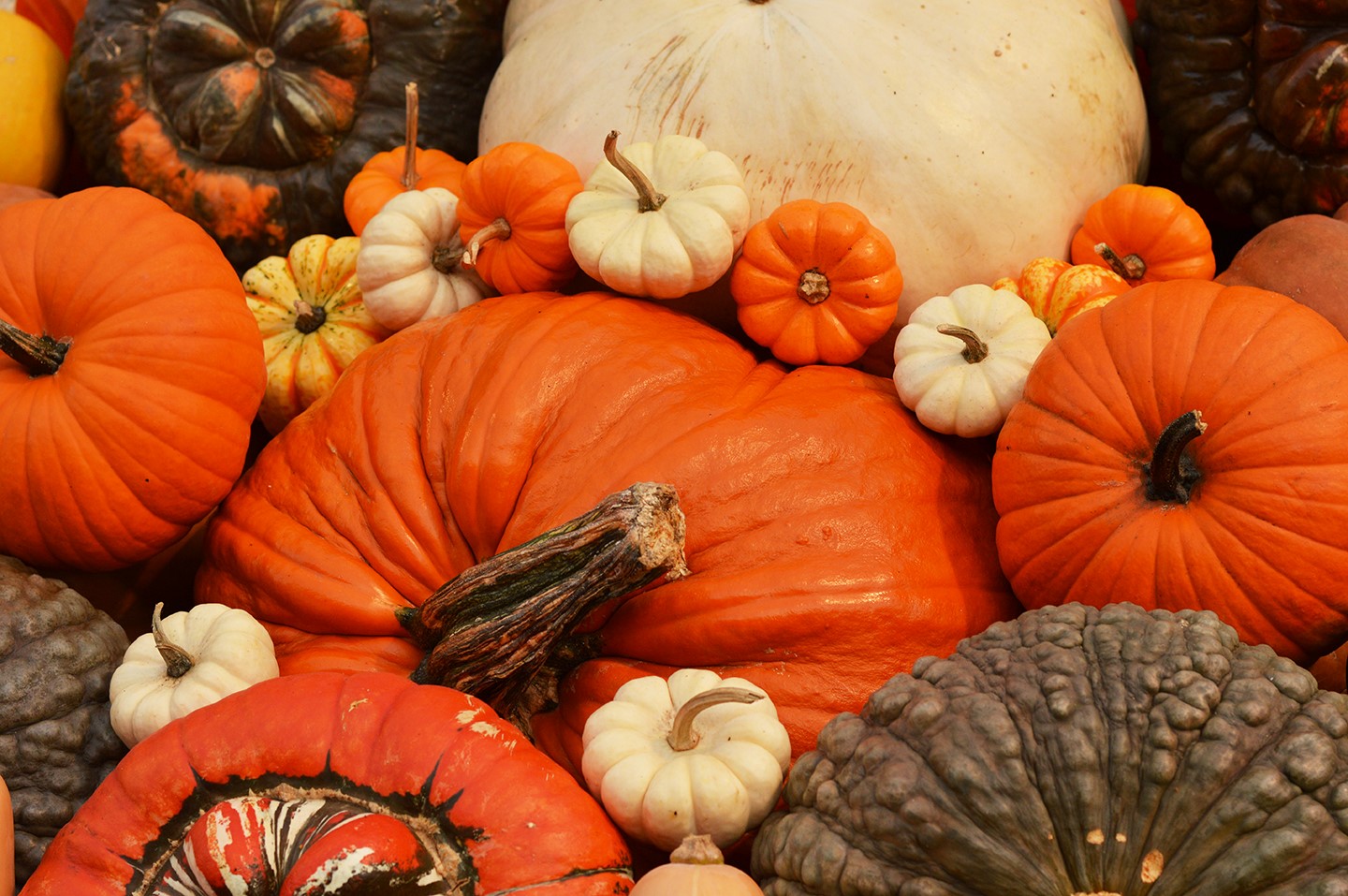 It’s a week you look forward to all year long, sometimes (dare I say it?) more so than Christmas. Driving to church on the Sunday prior you have to take a detour because Court and Main streets downtown are closed off. Before you can grumble though, you notice the green tents, the flashy carnival rides, vendors, and carts setting up their fares. And your heart flutters with a childlike thrill. It’s The Pumpkin Show! 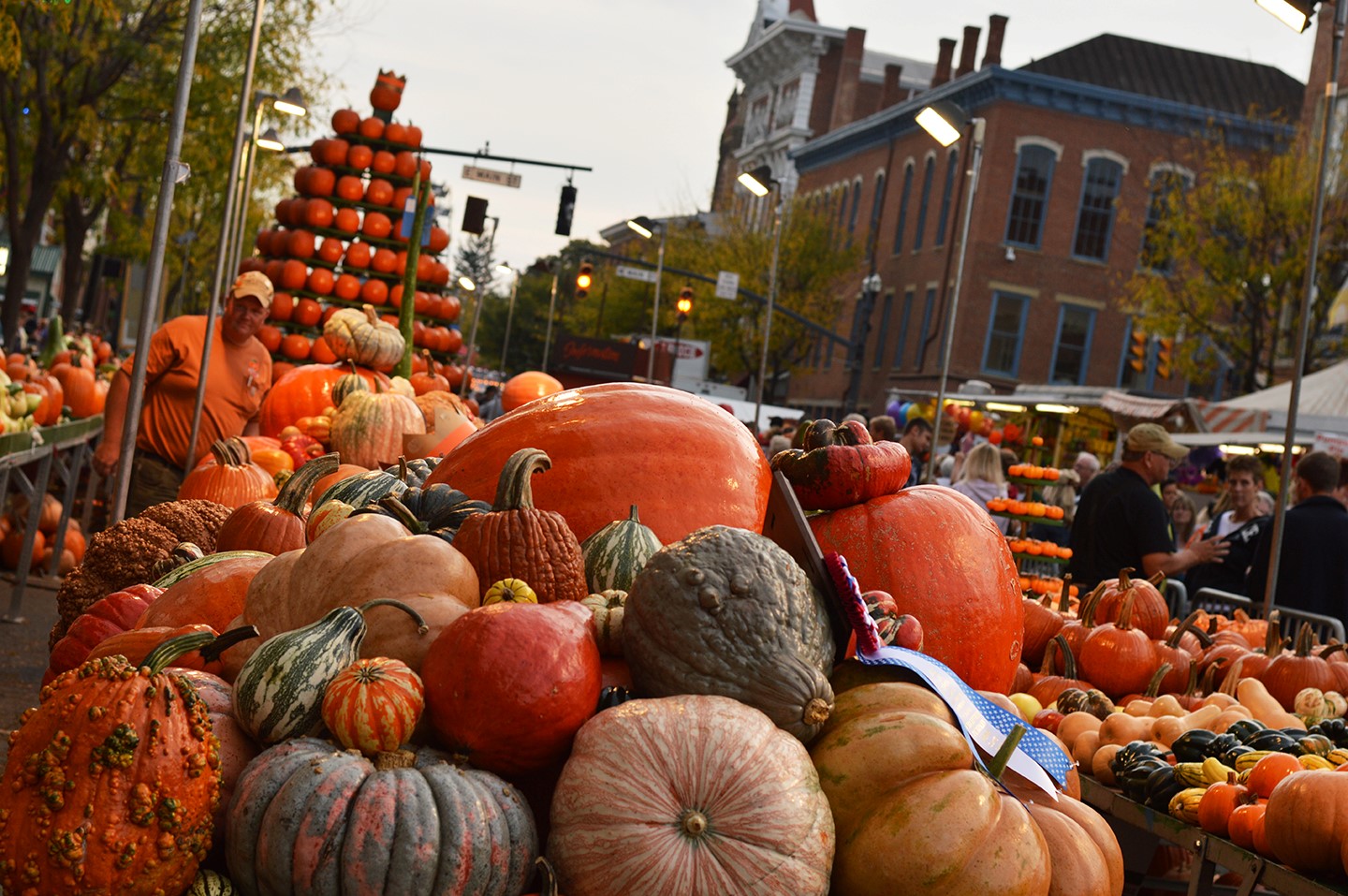 Over a hundred years old, The Pumpkin Show is not your normal small town festival. In fact, if you ever have  the audacity to refer to The Pumpkin Show as “The Pumpkin Festival” you will swiftly and, rather curtly, be corrected by one of the locals. That is, if you are not first blasted to ash by a Circlevillian’s livid laser beam glare.

The Pumpkin Show is four days long, Wednesday through Saturday. Tuesday night is open for locals only. Within four days this small town of 14,000 attracts over 400,000 show attendees from all over the nation. Local schools close. Traffic south of Columbus comes to a standstill. The cell towers freeze from the overwhelming mass of calls and texts from people trying to find others in their group. If you want to see the largest winning pumpkin, crowned and grandly weighing in at 1,312 pounds, be prepared to push your way through a clotted sea of baby strollers, elbows, and camera flashes. 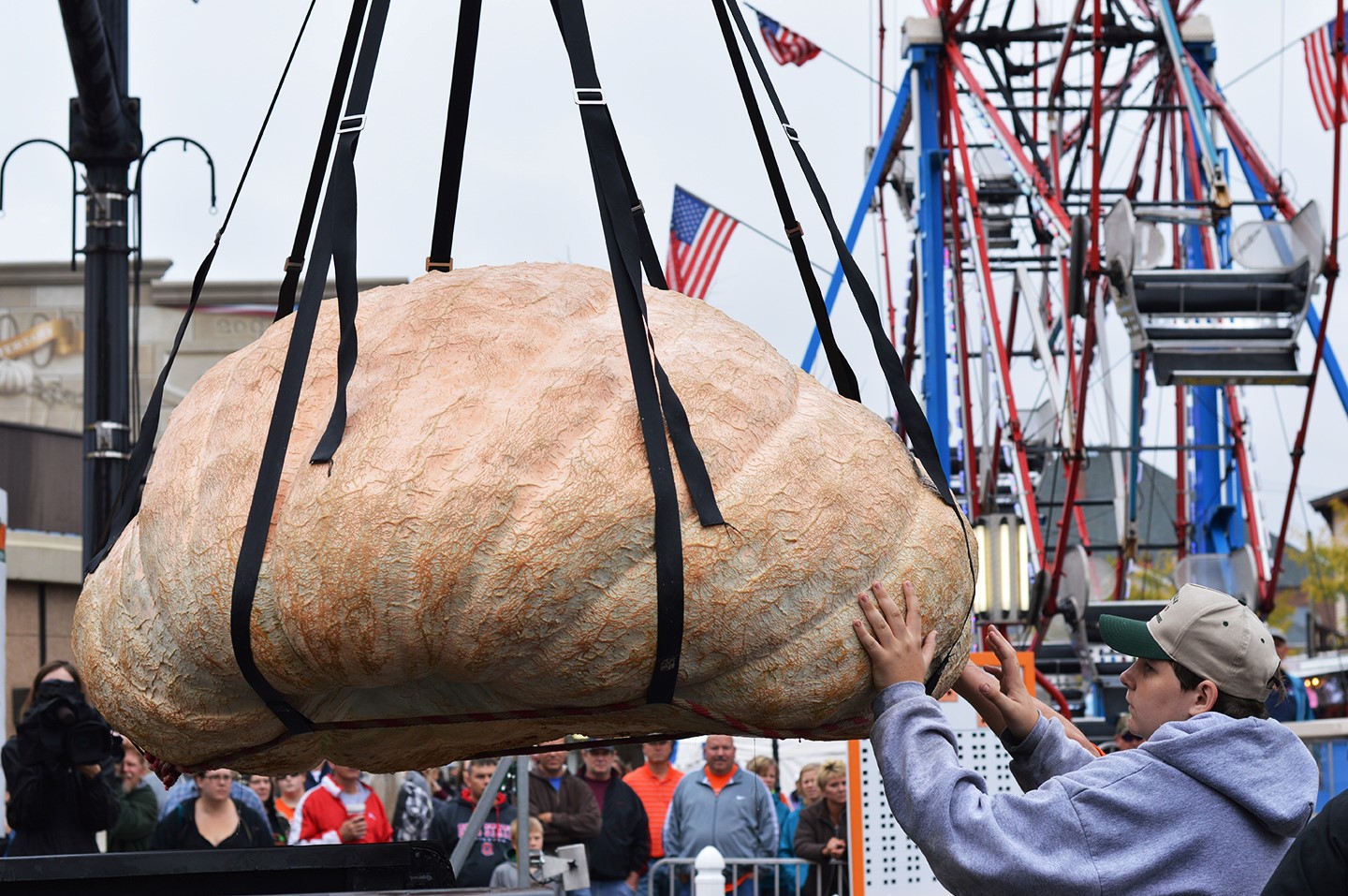 Since Bryan and I made the cross-country move to Utah last year we missed The Pumpkin Show. For like, the first time. Ever. It was a lot more heart wrenching than I expected and I spent a lot of time tearfully watching the online webcam and craving hot mini pumpkin donuts.

This year, we were sure to not make the same mistake. It was a good thing too, because this year marked the ten year anniversary Bryan and I have been together. While still in high school, we went out on our first date to The Pumpkin Show. As we were walking back to Bryan’s car that night holding hands, knuckles white, traversing the shortcut through the alley by Ted Lewis park, Bryan awkwardly asked if I would be his girlfriend.

So yeah. I’m very fond of this time of year. There’s a lot of warm memories and happy reunions. Family flies in from out of town. You run into friends you haven’t seen for over a year. There’s a lot more to The Pumpkin Show than giant pumpkins and the freaking best pumpkin food on the planet (actually…I might have to retract the last part of that statement. It’s ALL about the food!). 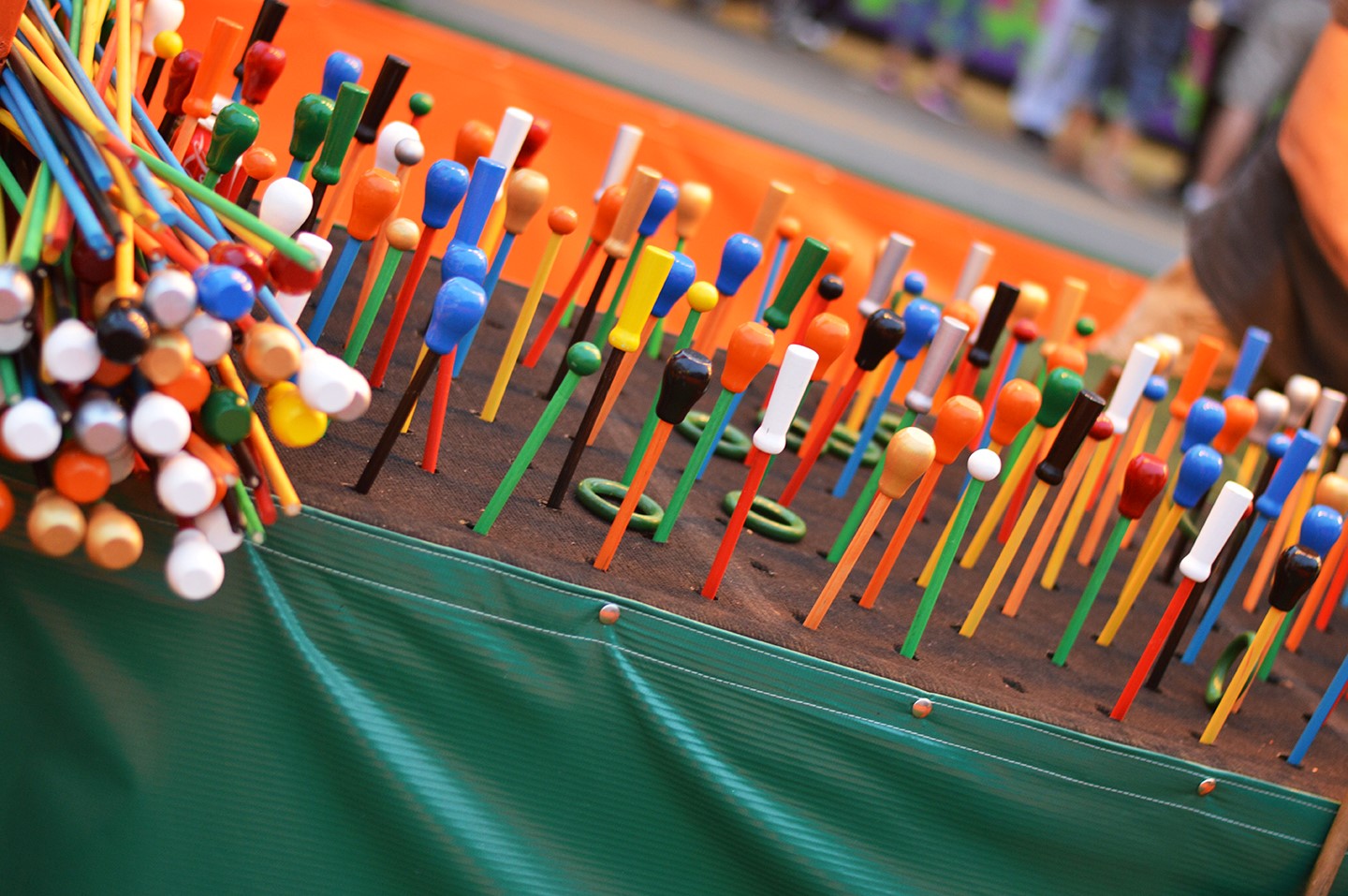 Bryan and I have traditions that we follow each year at The Pumpkin Show. We always park at his aunt’s house so we can take the same shortcut through the alley. Every year, Bryan asks “the question.”

After waiting in a long line at the ATM, we walk past the bank to play the “Stick Game.” I don’t know what the game is actually called, but it’s basically a ring toss around cheap brightly colored walking sticks. There are nice sturdy canes you can win too, but they’re more difficult (yeah, I’ve won them). 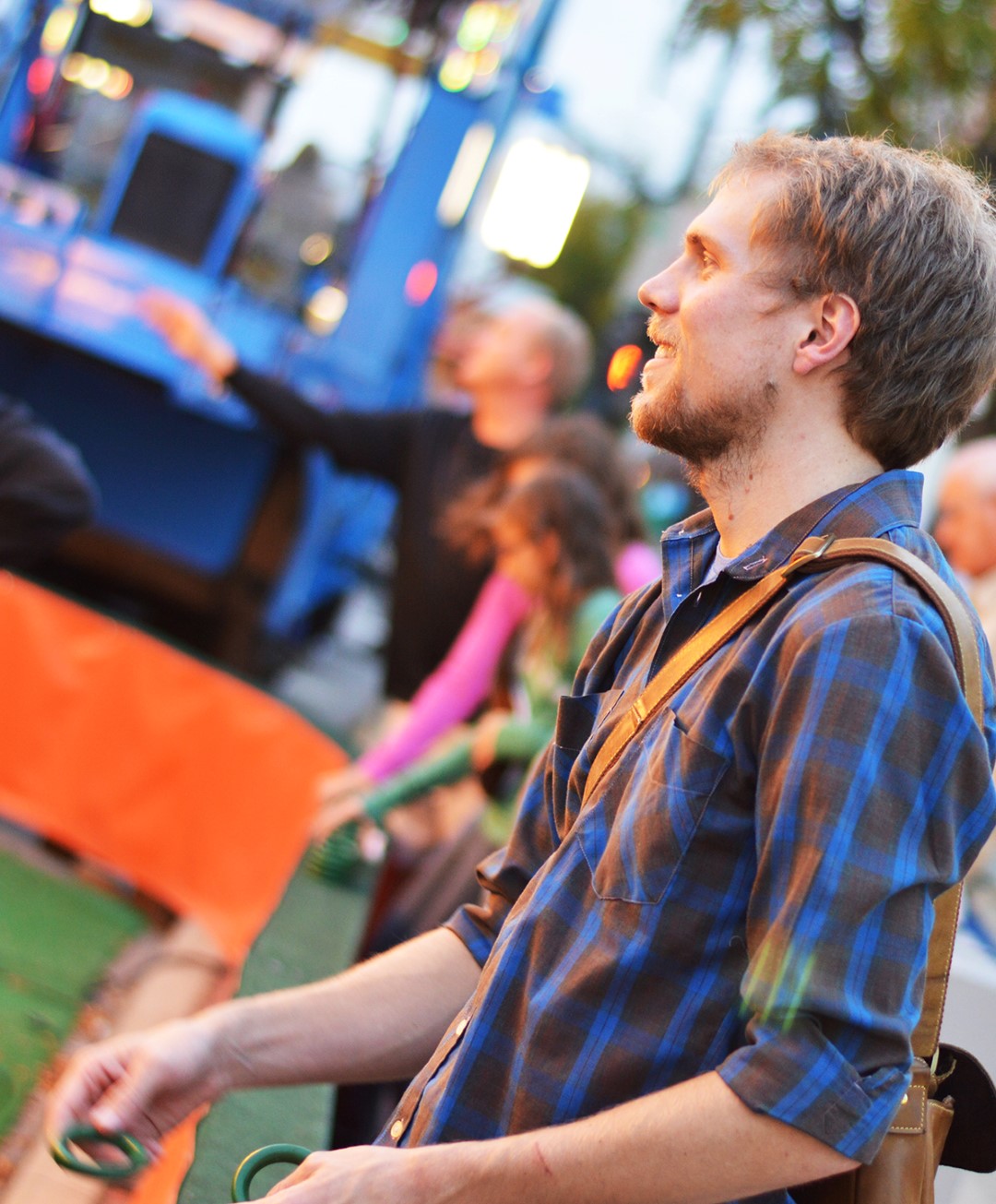 Not to brag or anything, but I’m super good at this game. This year Bryan pointed out a glossy black stick that he really wanted. “Win it for me,” he said. “Okay,” I shrugged. First throw, and I land it. I’m still nowhere near as good as his Uncle Robert. The man is infamous. The “Stick Game” carneys recognize him every year and usually end up banning him from the game because he wins so much. 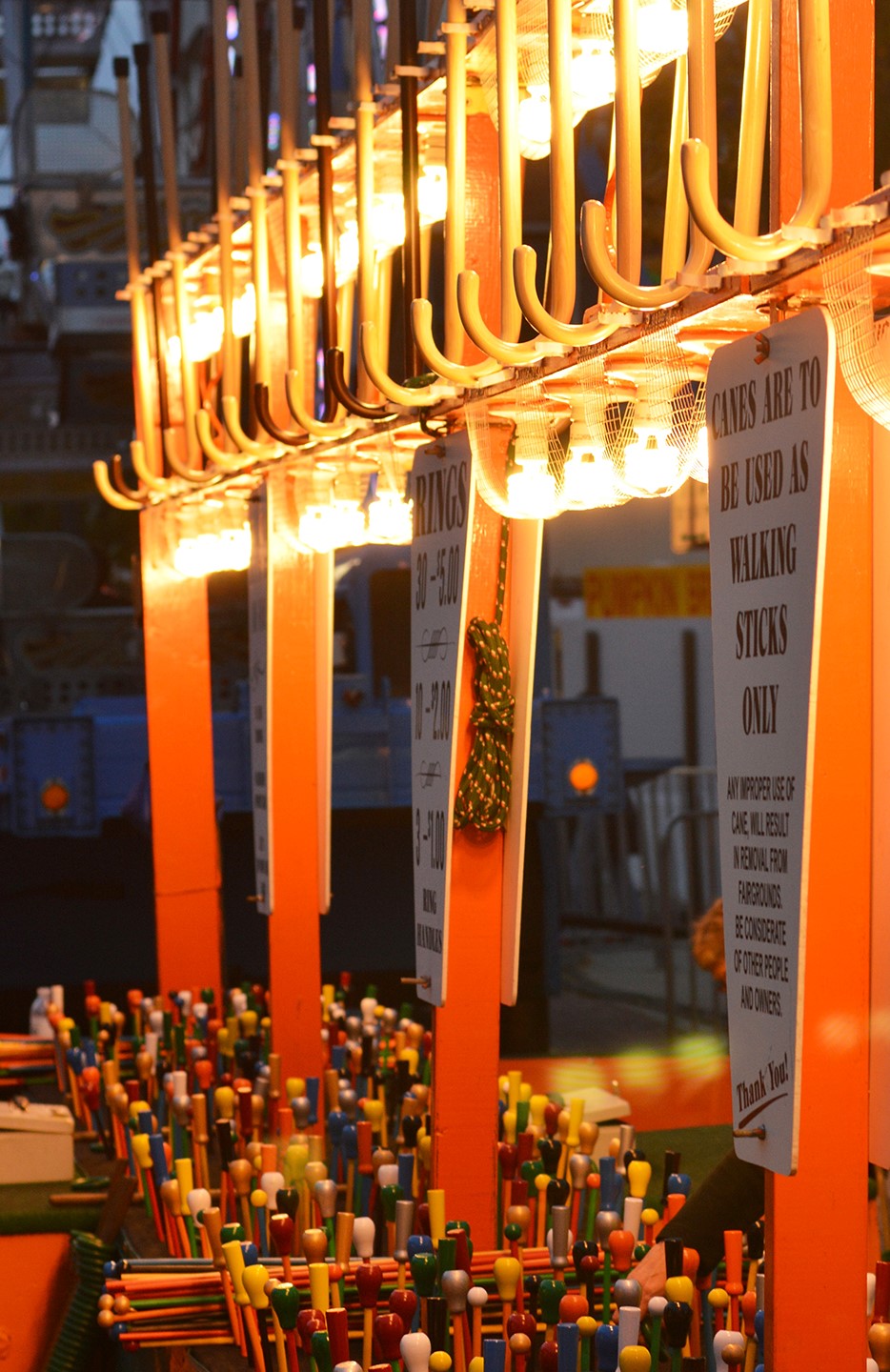 Proudly holding our flashy new walking stick, we walk down East Main street towards a tiny booth selling THE Mini Pumpkin Donuts. The line usually stretches down the street’s expanse, but lucky for us we’re able to walk up and lay down $3.50 for a baker’s dozen of heaven in the form of steaming sugary fried lumps of pumpkin-y dough. As we dig into the greasy bag we walk across the street to marvel at artist Jack Pine’s glass blown pumpkins. 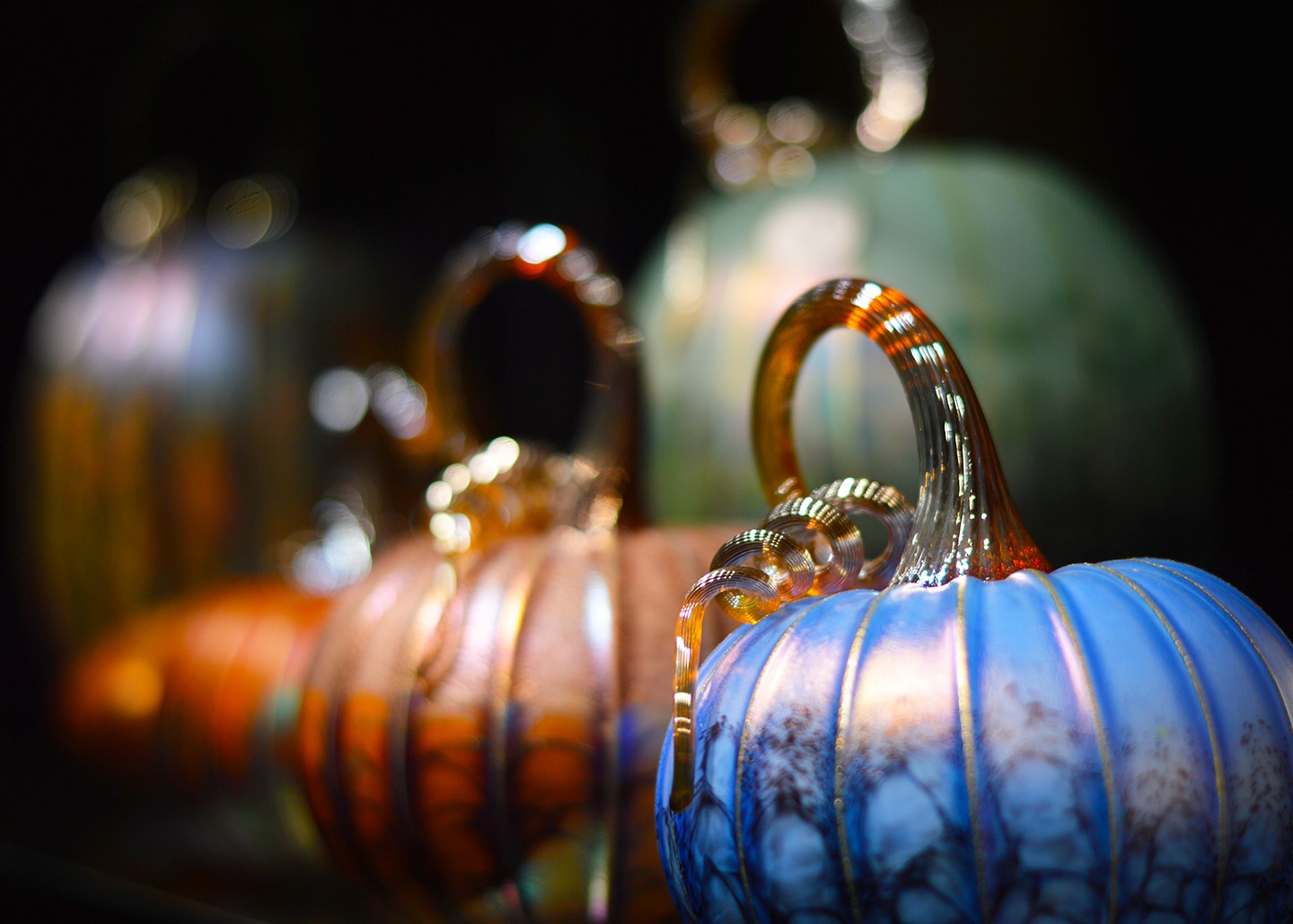 Jack Pine comes out with a new color and style of pumpkin every year providing dedicated Pumpkin Show attendees the opportunity to purchase an exorbitantly expensive, yet exquisite collection of delicate multicolored glass gourds. I feel lucky enough to own just one. 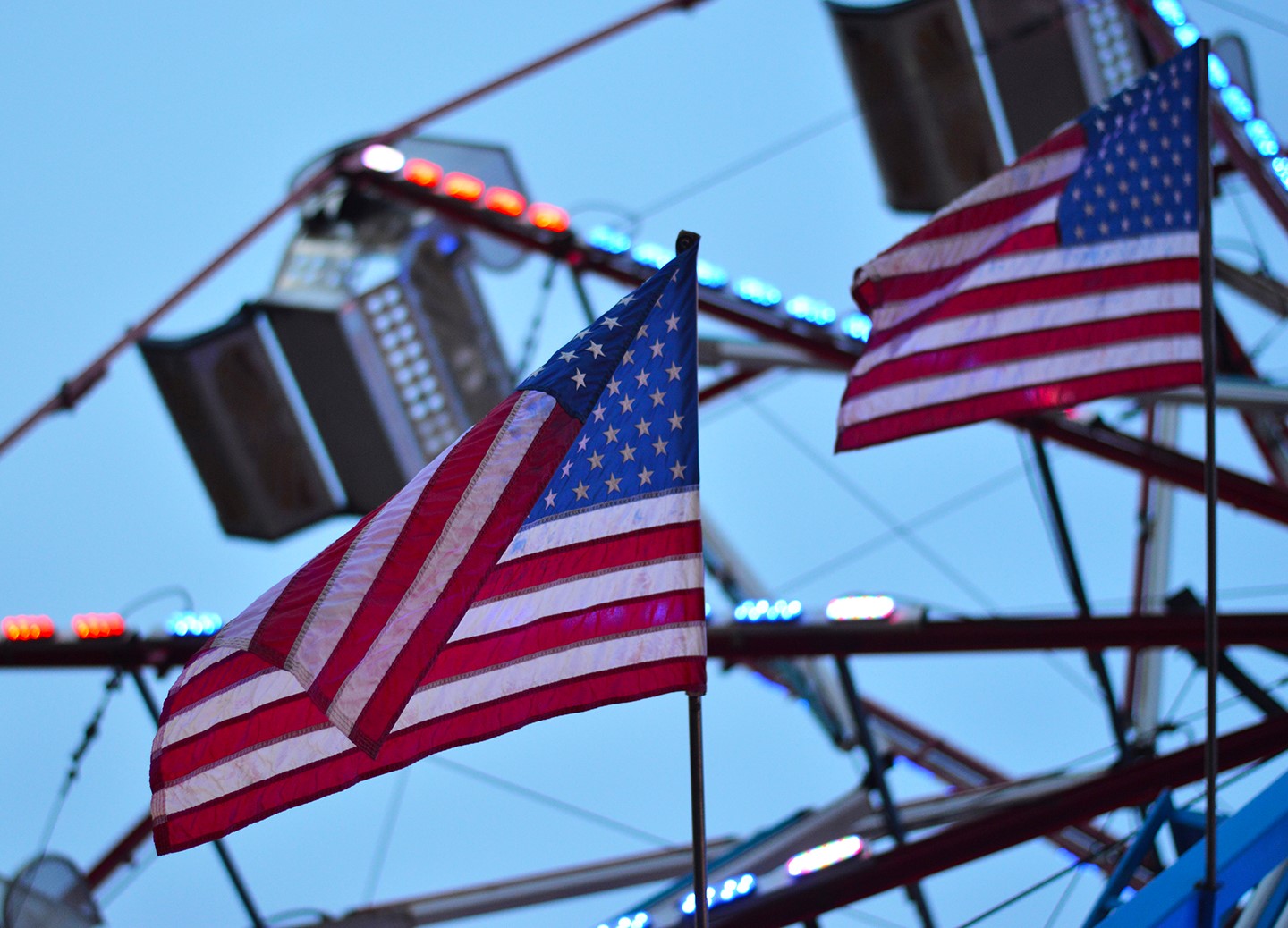 As we have fasted all day in preparation for our Pumpkin Show binge, we head over to the Bourbon Street Grill and Cafe tent for some bourbon chicken. Remember this. Not all bourbon chicken is the same. The place to go to is beside the old Pumpkin Inn. Always look for the long lines. Or simply float along the thick billows of steam infused with the smell of spicy chicken frying hot on the grill on a crisp autumn night. 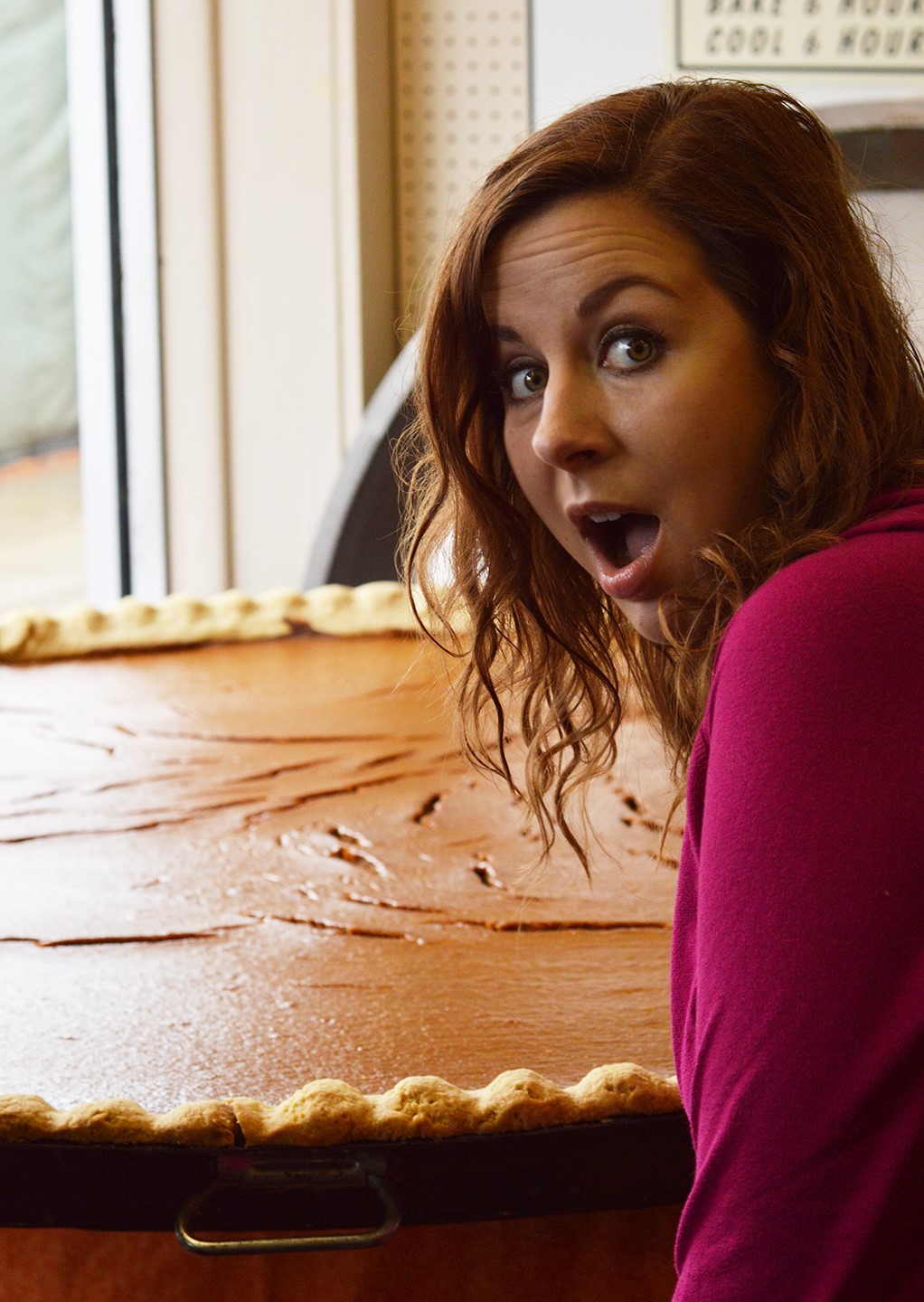 Lindsey’s Bakery is another must see, home of the world’s largest pumpkin pie. 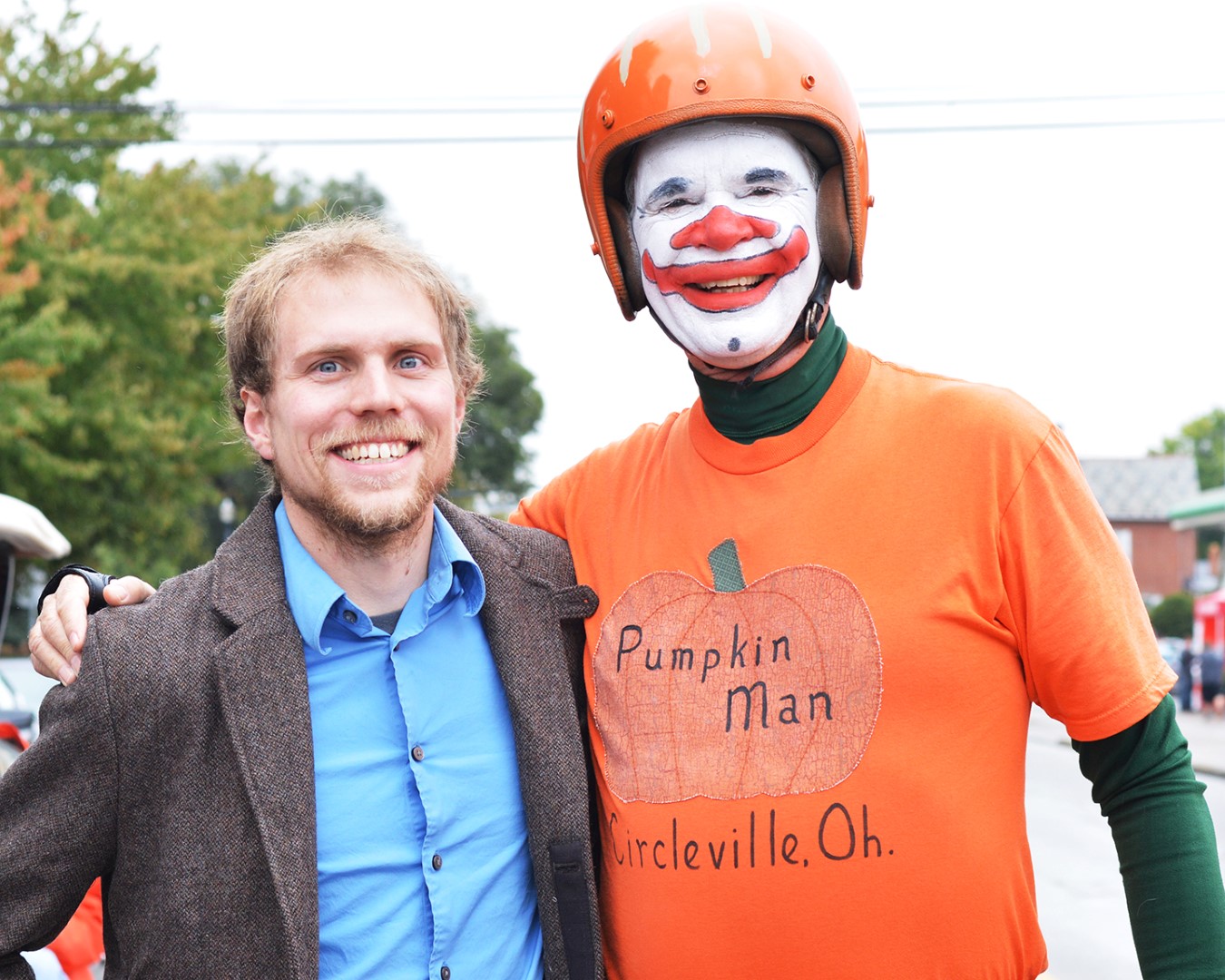 Don’t pass on an opportunity to say hello to the Pumpkin Man! He’s there every day cheerfully rollerblading and waving at his fans in every afternoon and evening parade. 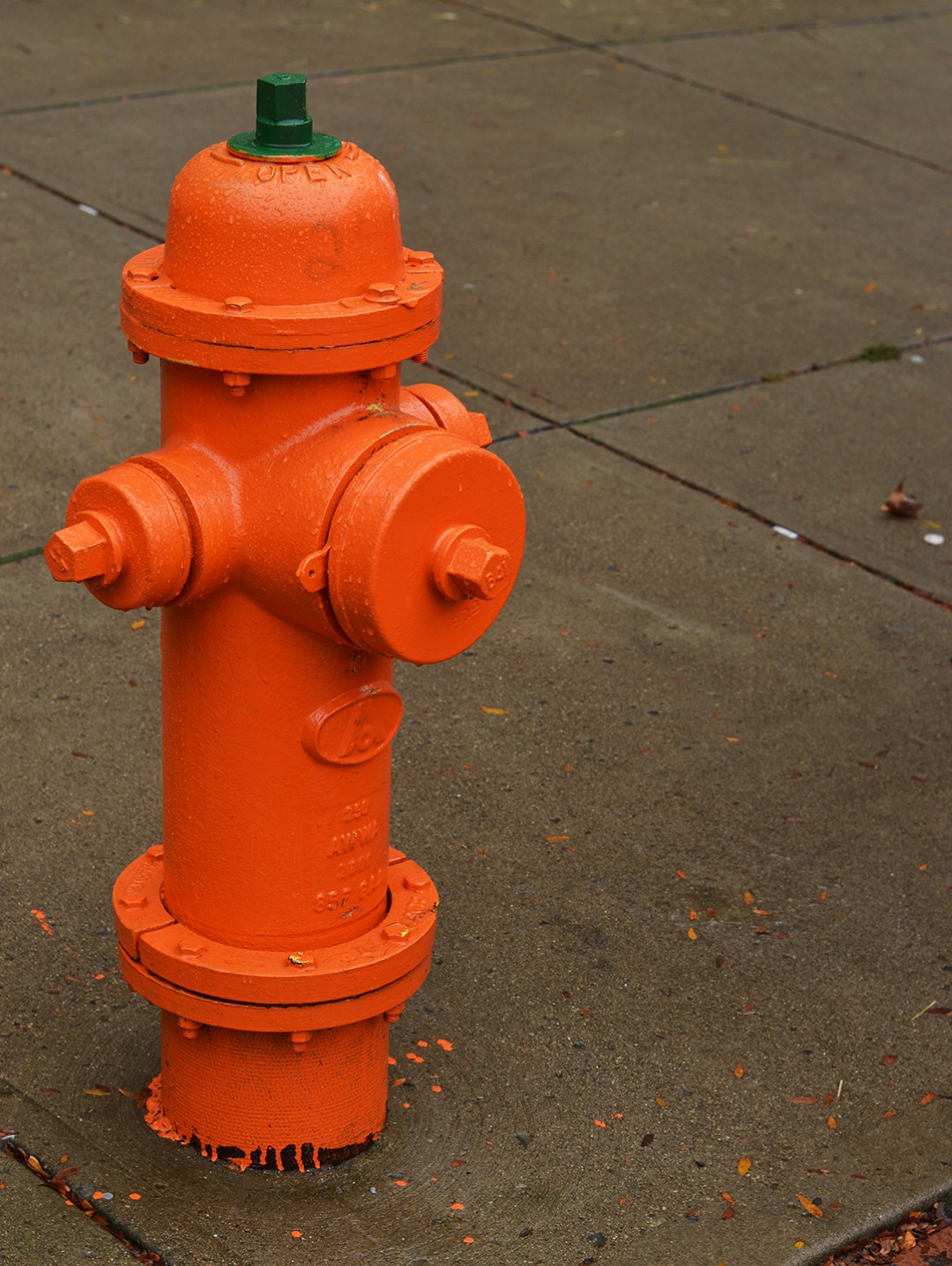 Circleville is very proud of its pumpkin-themed heritage and doesn’t miss an opportunity to boast about it. The Circleville water tower was designed to resemble a giant pumpkin. The man hole covers on the streets feature The Pumpkin Show logo. This year, the fire hydrants were painted to resemble pumpkins. 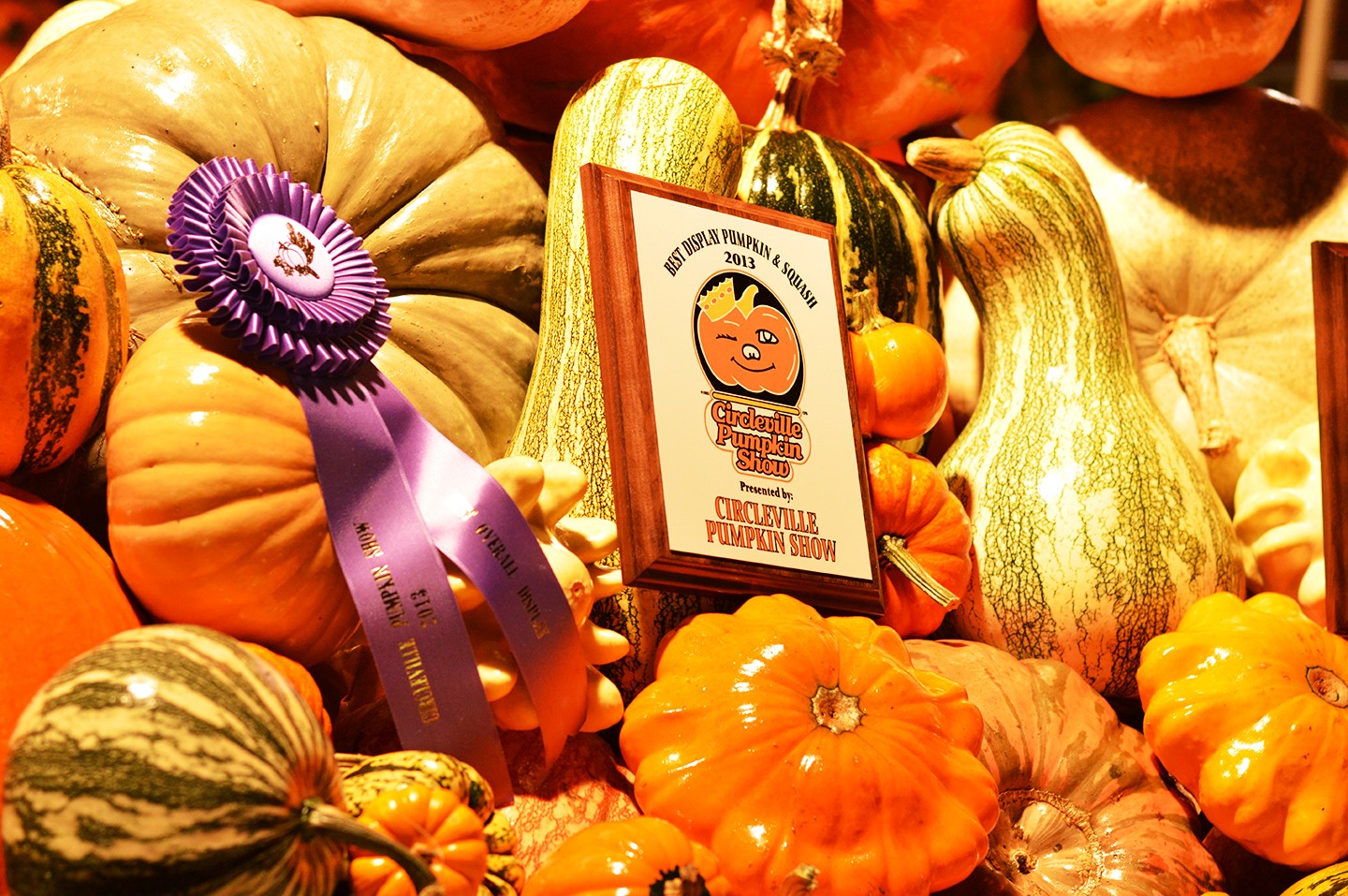 I feel as though I’ve only scratched the surface of this splendid autumn holiday. You just need to go. Go for the pumpkin food from the pizza, chili, burgers, blossoms, bread, pancakes, butter, cookies, taffy, cake, cream puffs, fudge, brownies, ice cream, donuts, waffles, cappuccino, pie…all pumpkin! Be sure to bring along friends and family. Relish the feel of crunching through the leaves on the cracked sidewalks, admiring the old historical homes of downtown. Listen to the children screaming with delight on their first carnival ride. Cheer on the Miss Pumpkin Show candidates.

Even though the 107th year of The Pumpkin Show has now passed, please join me by sharing a comment of your favorite Pumpkin Show traditions or memories. If you’ve never been, you can try to lift your spirits by sharing your favorite moments from your own small town “festival.” It’s not going to make you feel any better, though. Not until you’ve feasted on hot mini pumpkin donuts. 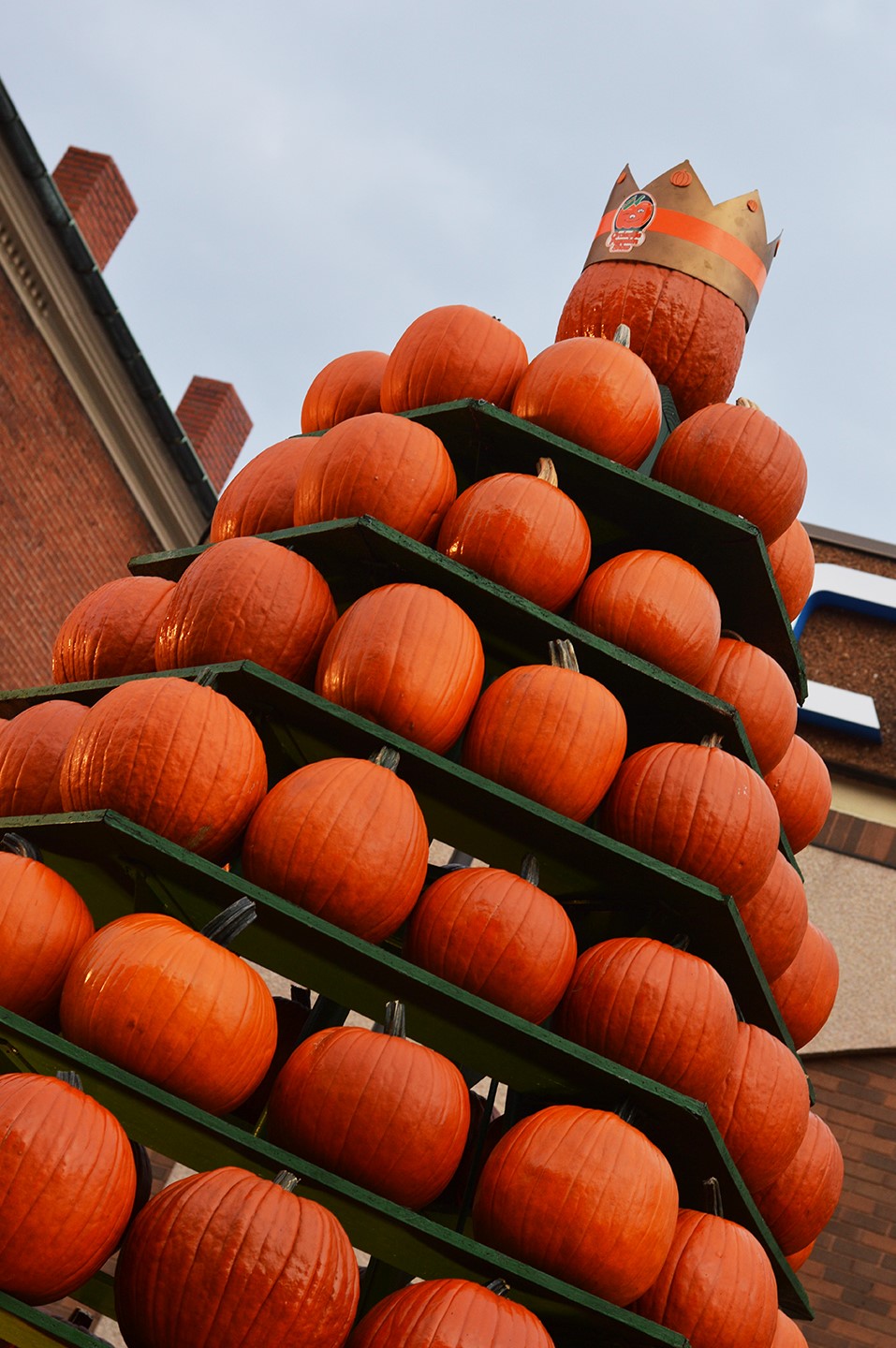