I’m a geek. There. I said it. When the Lord of the Rings movie trilogy hit theaters while I was in high school I attended the midnight premiers donning pointed ears, hairy feet, and an Elven made brooch. I even made my own lembas bread. I’m also a Potterhead, Sherlockian, Trekkie, Bronie (what’s the feminine term?), and a Whovian.

This past weekend Bryan and I decided to venture where we’ve never gone before. We attended our very first Comicon. 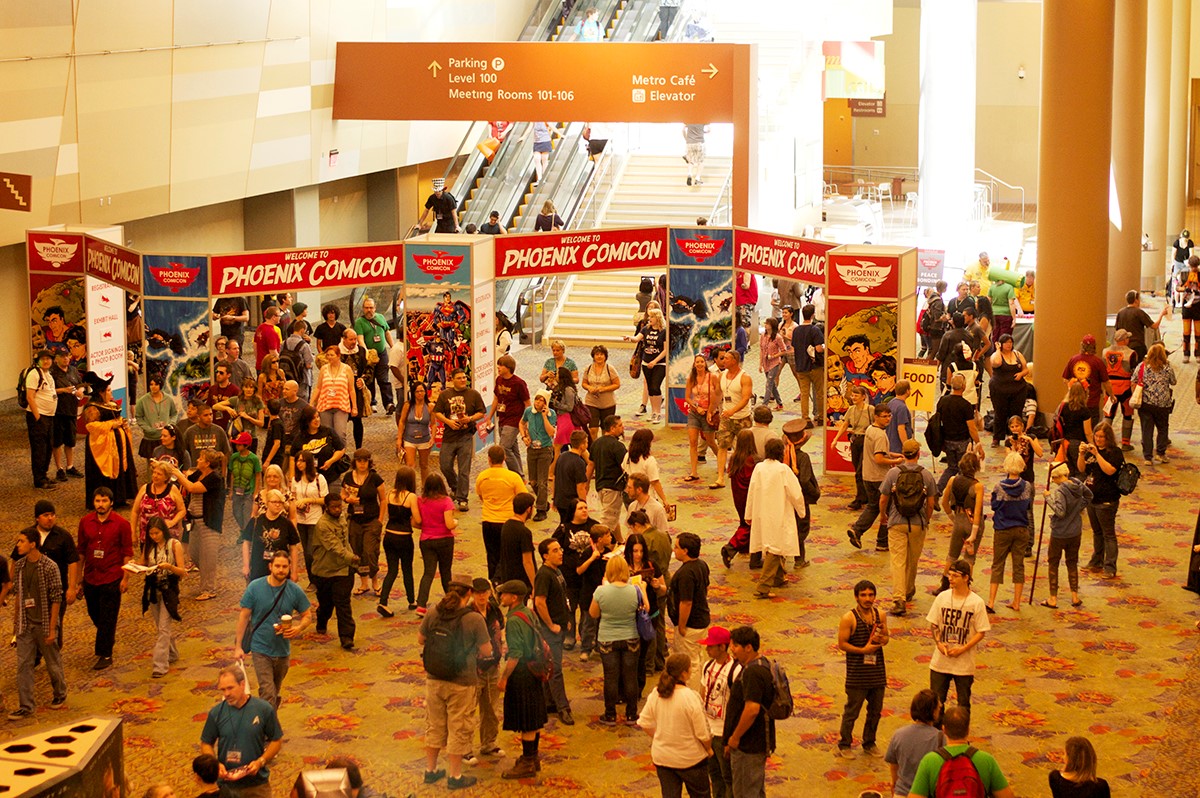 We woke up bright eyed and bushy tailed at 4 a.m. Saturday morning and arrived fashionably late to the airport (which is not a preferable way to arrive at an airport), cosplaying as the Doctor and Amy Pond (our costumes are important to this part of the story)…with forty minutes to get to our plane. And we still needed to park. And go through security. Which technically means we only had ten minutes to make our flight as they board thirty minutes prior. And Bryan had his Doctor’s sonic screwdriver tucked in our carry-on which made TSA very nervous and they had to run our bag through the x-ray twice. Which made us even more nervous that we wouldn’t make our flight. So nervous, in fact, that we ran pellmell to our gate and Bryan accidentally abandoned his Doctor Who themed wallet at security (but that’s another story). We made it though, just as they were shutting the gate.  Whew!

We were on our way to the Phoenix Comicon.

I have to be honest. I was very nervous about our first Comicon. I had the impression that Cons were these big reunions for the socially awkward who are over forty and still live in their parents’ basements playing World of Warcraft or watching anime.

It was awesome! There were 20,000 people attending, from infants to 90+, and all of them were super cool. And such talent. From the handmade costumes of the attendees, the artists, the writers, the actors. Everyone was just as excited as we were and eager to share in their passion or even lend a hand. For example, two wonderful ladies who have been attending Cons for decades gave us a ride from our hotel. After an exhausting day of geekiness, we stepped out into the Phoenix sun in search of food. Another Con goer noticed we looked a little lost and pointed us in the direction of nourishment.

One of the highlights of our adventure was watching cosplayers (and taking photos of/and with cosplayers). Here are Doctors five, ten, and eleven (Bryan is on the right). 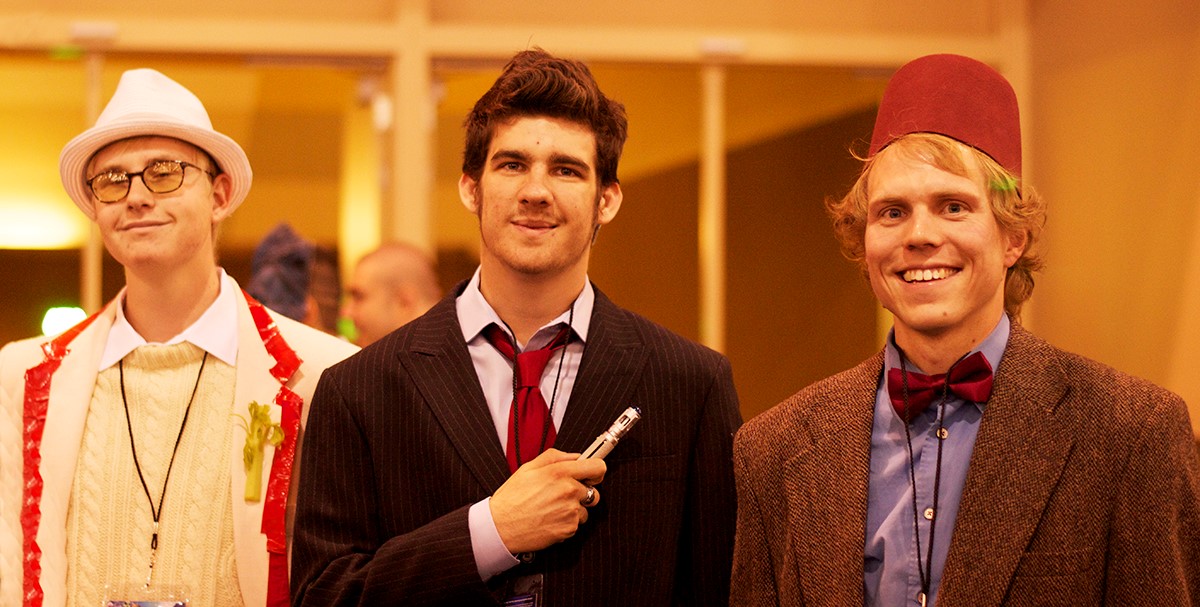 Our costumes certainly weren’t original, but it was fun for our first Con to see the massive amount of Doctor Who fandom. One girl gave Bryan a hug and declared him the 45th Doctor she had embraced that day. 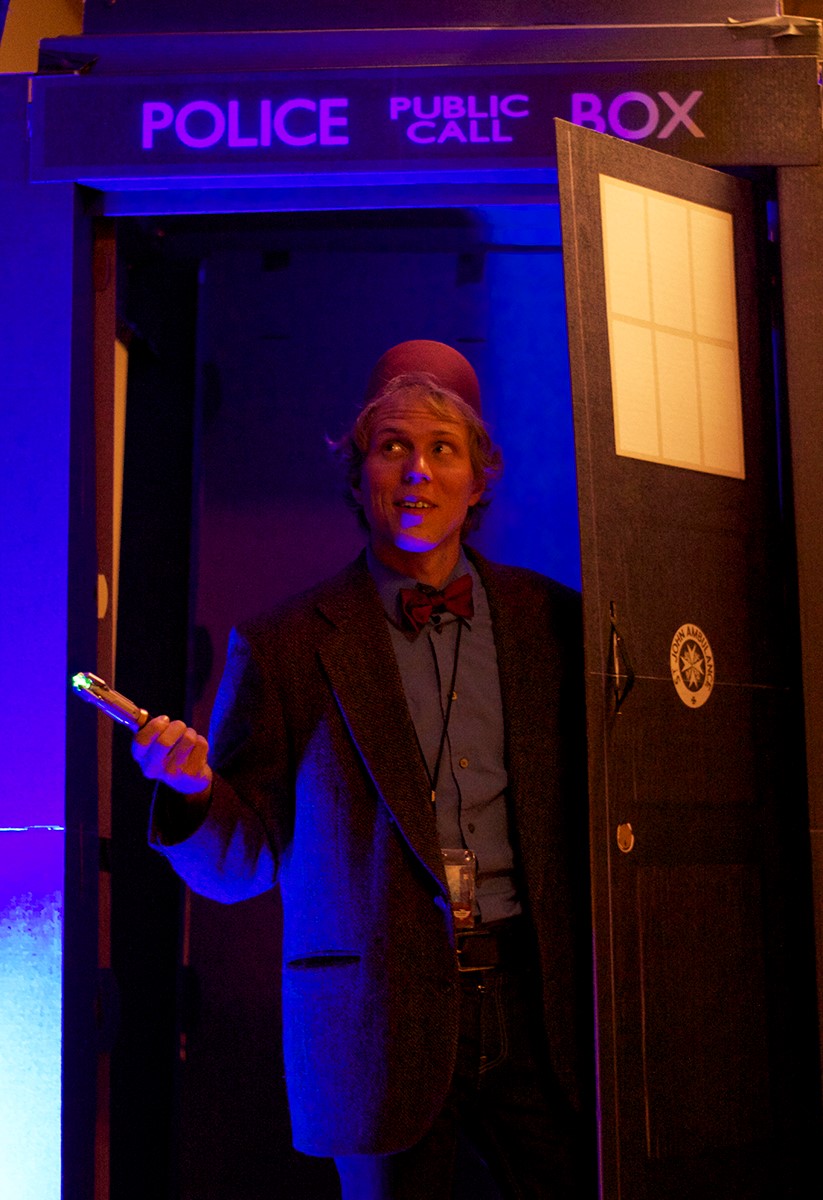 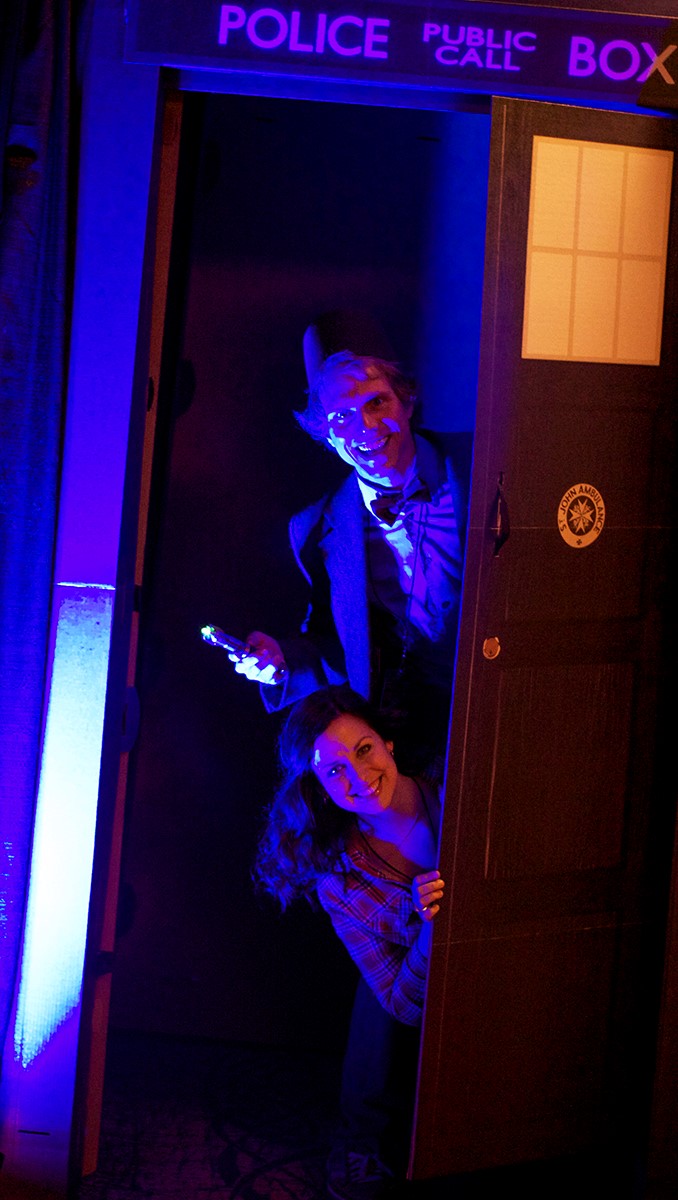 One Con attendee had his own remote-controlled Dalek! 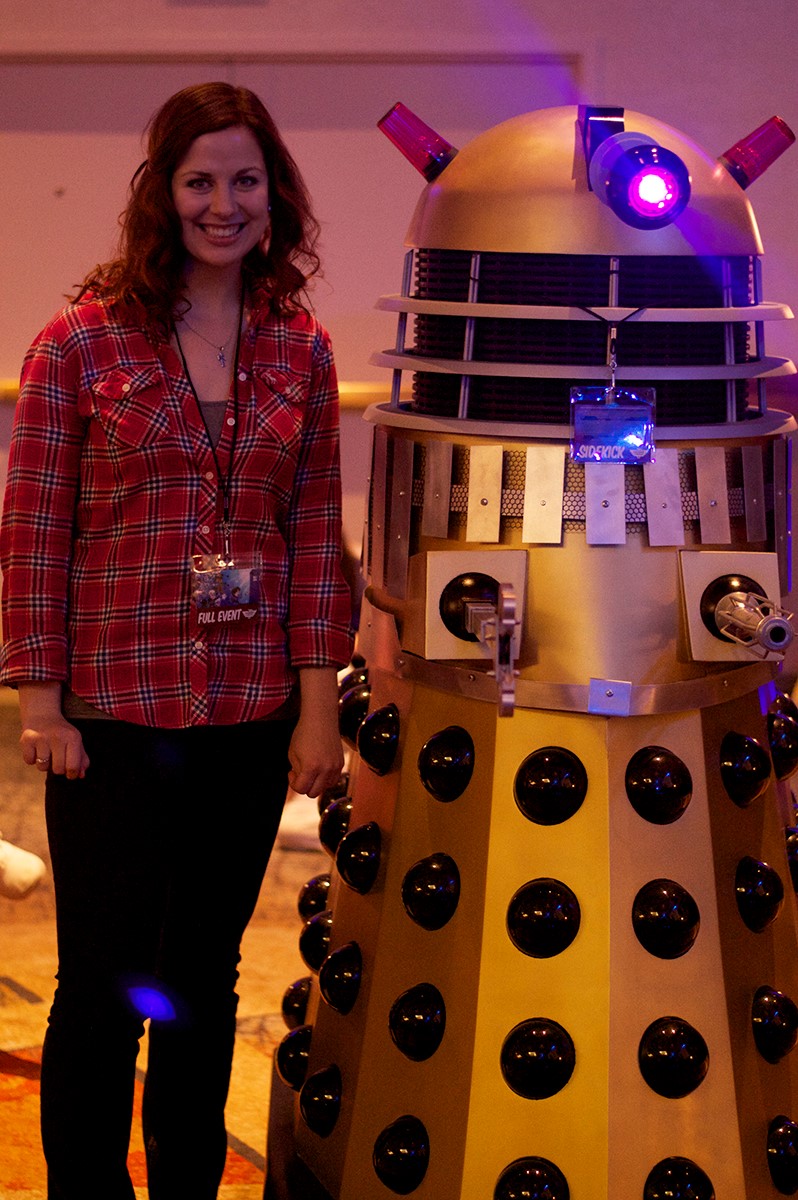 My favorite part of the Con was meeting Vic Mignogna, best known as the voice actor for Edward Elric in Fullmetal Alchemist and as Captain Kirk in the new TV series Star Trek Continues. 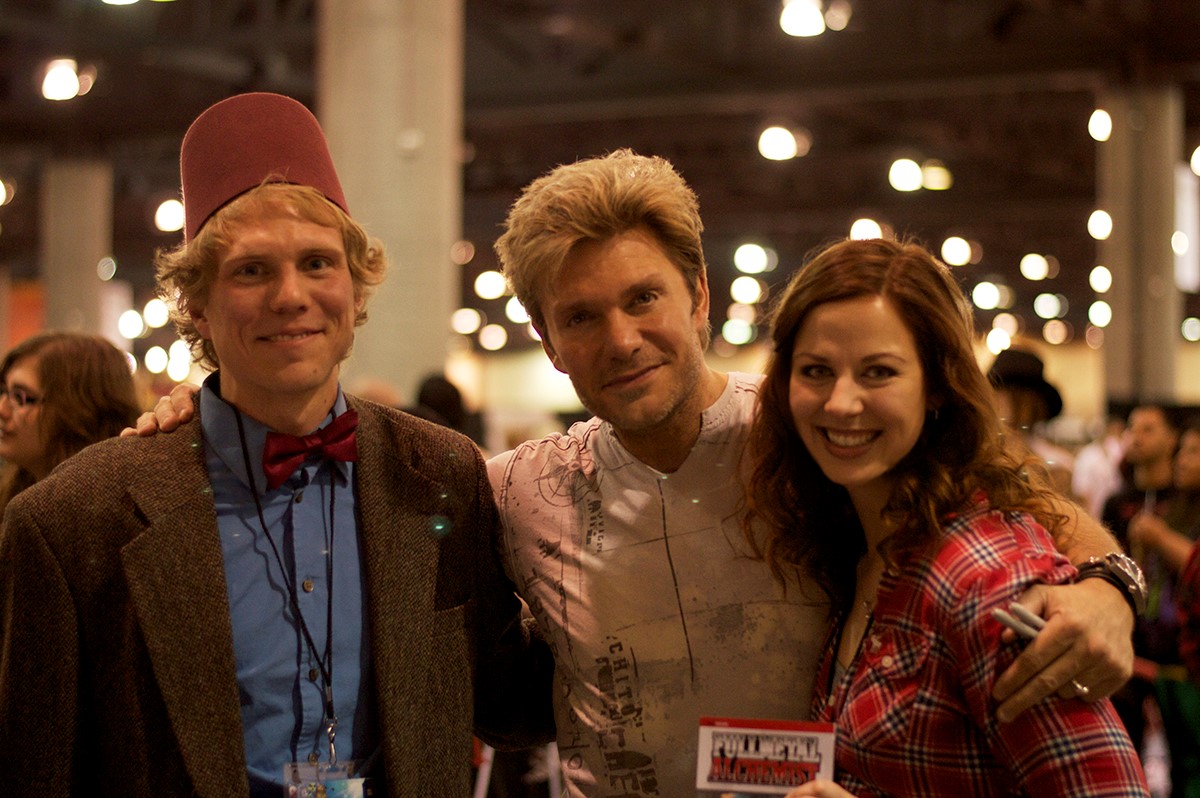 We met some amazing people including John Barrowman, Mike Mignola, Will Wheaton, Andrew Hussie, Caitlin Glass, D’Vyne Wrytes, and James A. Owen. We quickly learned that Cons are not for everyone, including (and sometimes especially) the rich and famous. Some were very reserved or seemed withdrawn and didn’t want to speak with their doting fans. It was obvious some did not want to be there. There was one packed panel we ended up leaving due to the foul language being used (a couple of times in response to questions asked by preteens). I understand we’re all fallible, we’re all only human. It can be disappointing meeting your heroes because you suddenly realize the fantasy you had created in their place was nothing more.

Which brings me back to Vic. His relationship with his fans was unreal. While waiting in a very long line for his autograph, I watched as he took the time to talk and listen with each fan with complete sincerity and attentiveness. He had this way of making each person he came into contact with feel like they just rocked the world. When our turn came, I silently told myself I was going to behave respectfully and with absolute decorum. I did my best not to blubber and I’m sure I looked like a smiling idiot as Bryan and I walked away from our Vic encounter grinning from ear to ear. Until our cheeks ached. And dancing a little jig inside. After having some dreams crushed we realized truly what an incredible role model Vic was. What’s more, he’s also a devout Christian. And his fans love and respect him for it.

There was also a Lego artist at the Con. Check out the bow tie. Bow ties are cool. 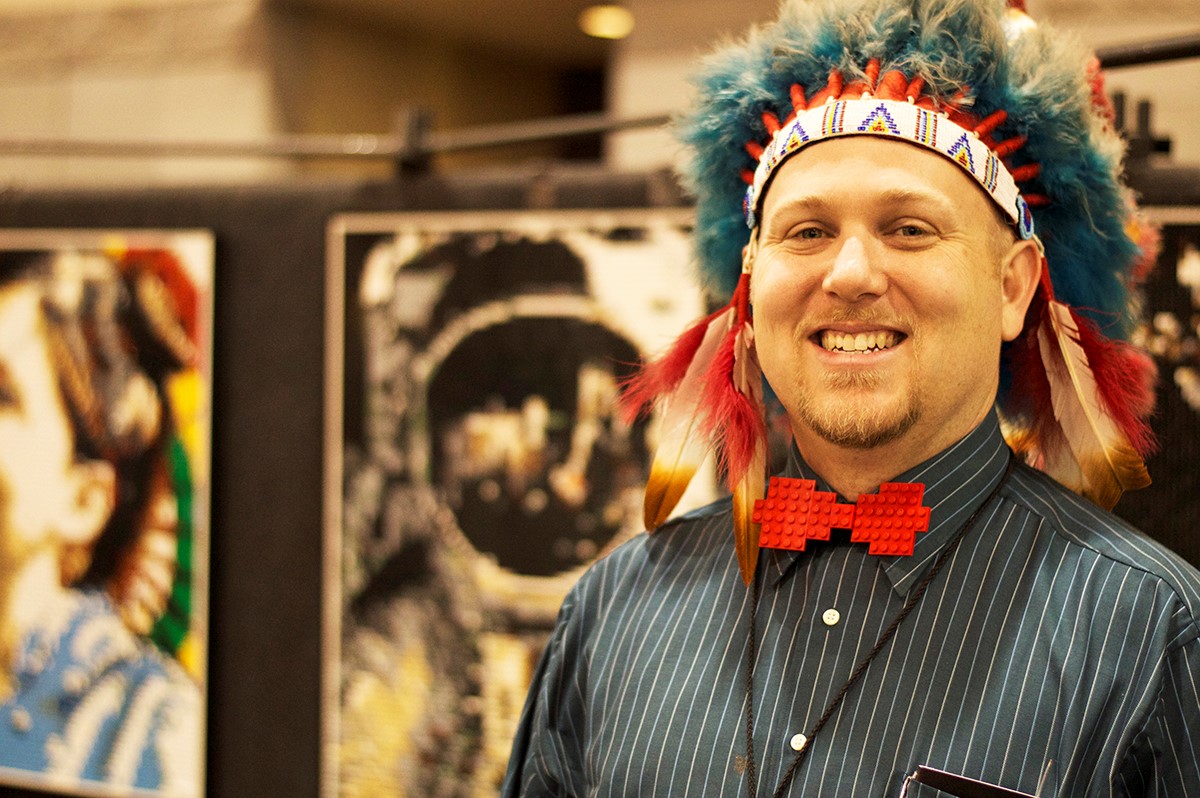 Here’s an awesome cosplayer as Thor. 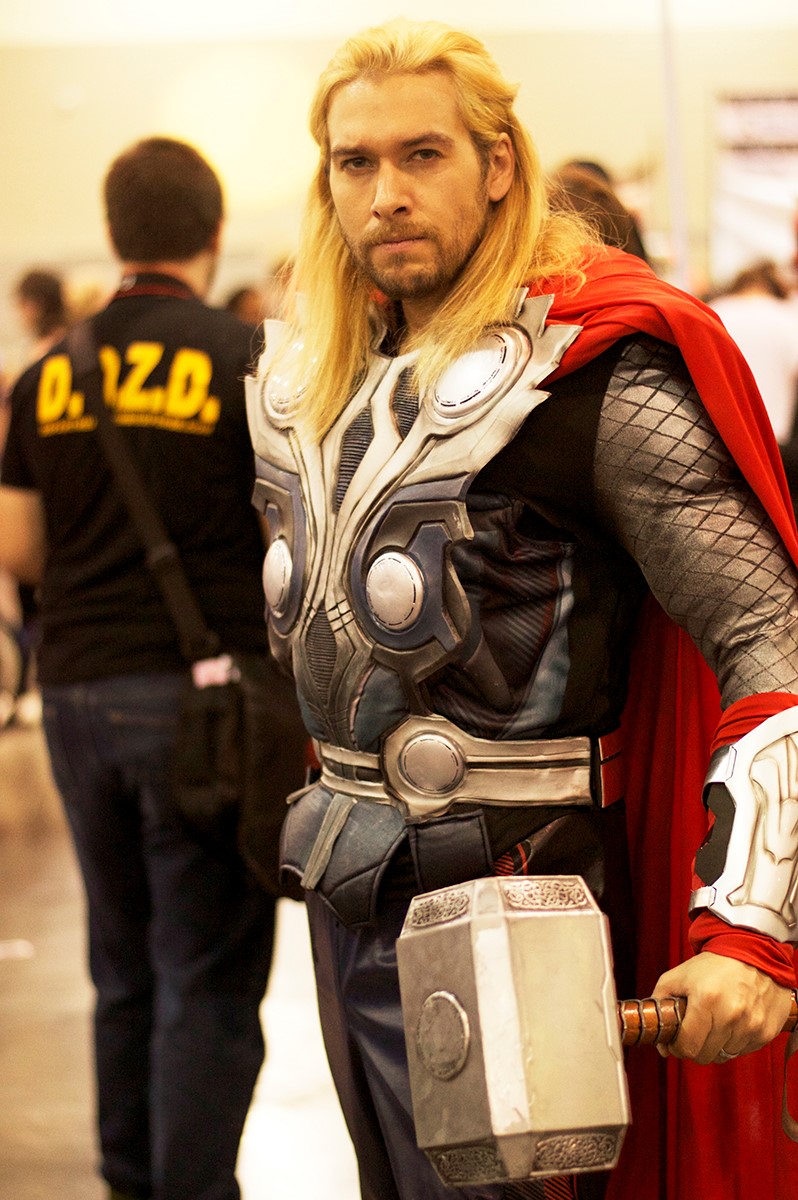 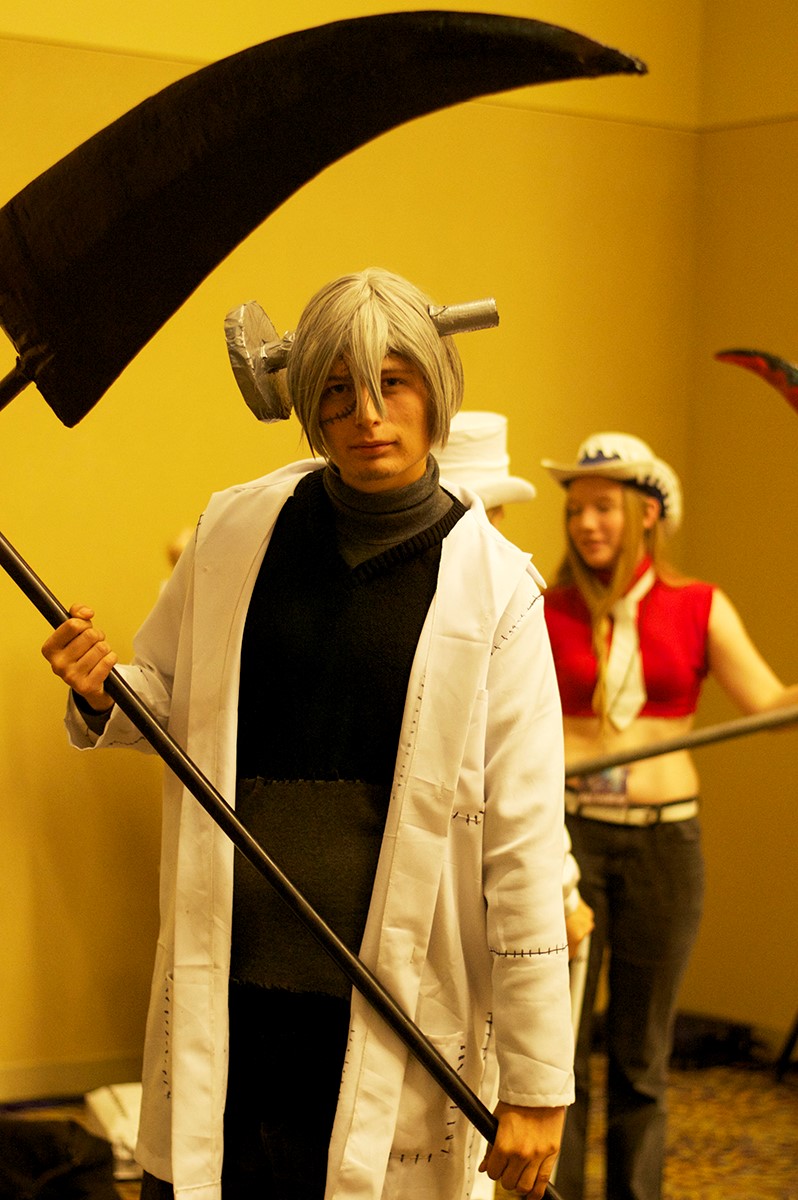 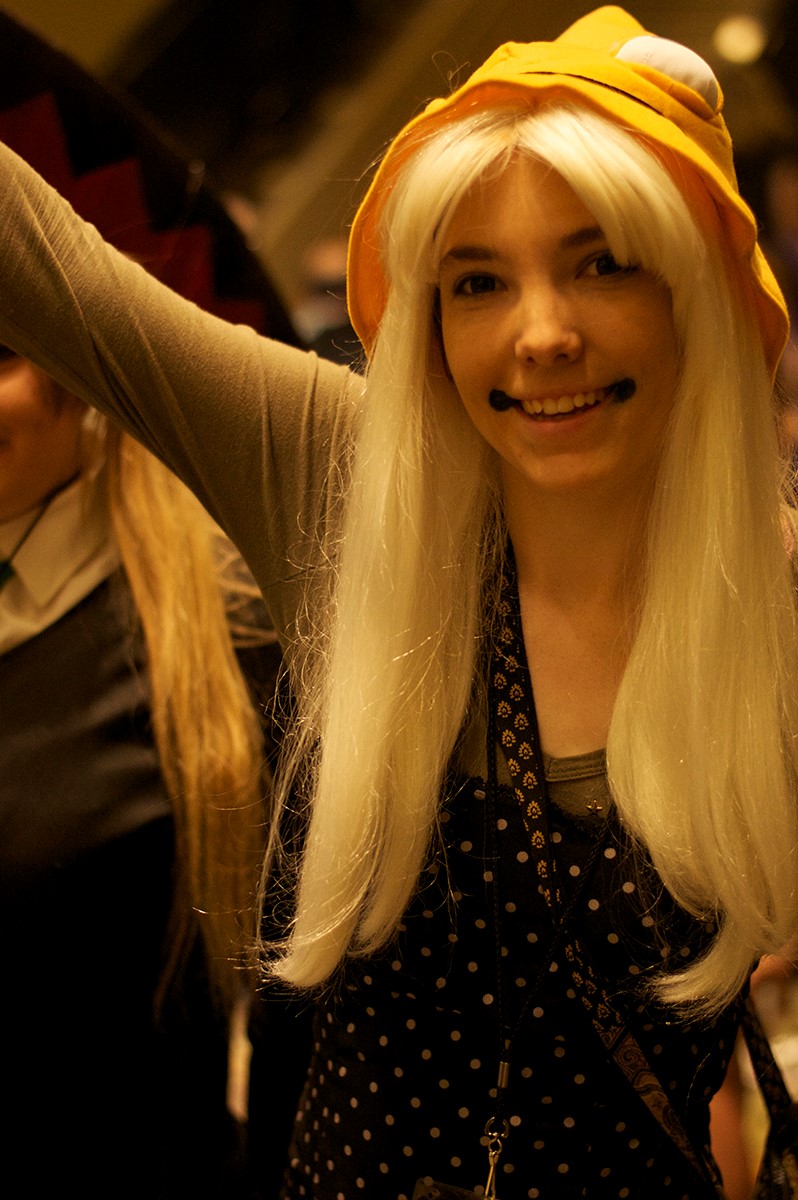 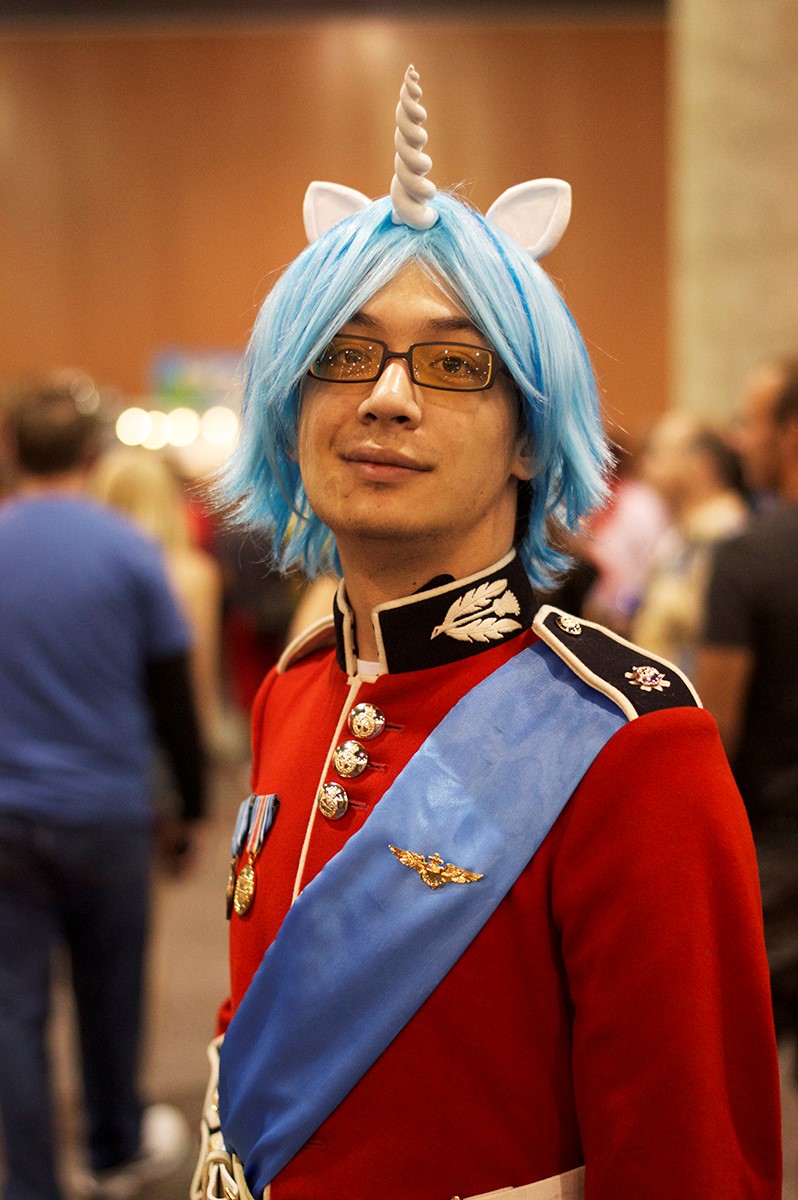 Bryan with Homestuck author, Andrew Hussie. The story goes the Con did not realize what a massive Homestuck fan base there was (there were more Homestuck cosplayers than Doctor Who). The line for Andrew Hussie’s autograph was twice as long as John Barrowman’s, who was the biggest name at the Con. The line was so massive in fact, they had to send fans away. Bryan was only able to get an autograph because someone decided to prank pull the fire alarm. When they finally let us back in the building, we ran. And made it to the front of the line! 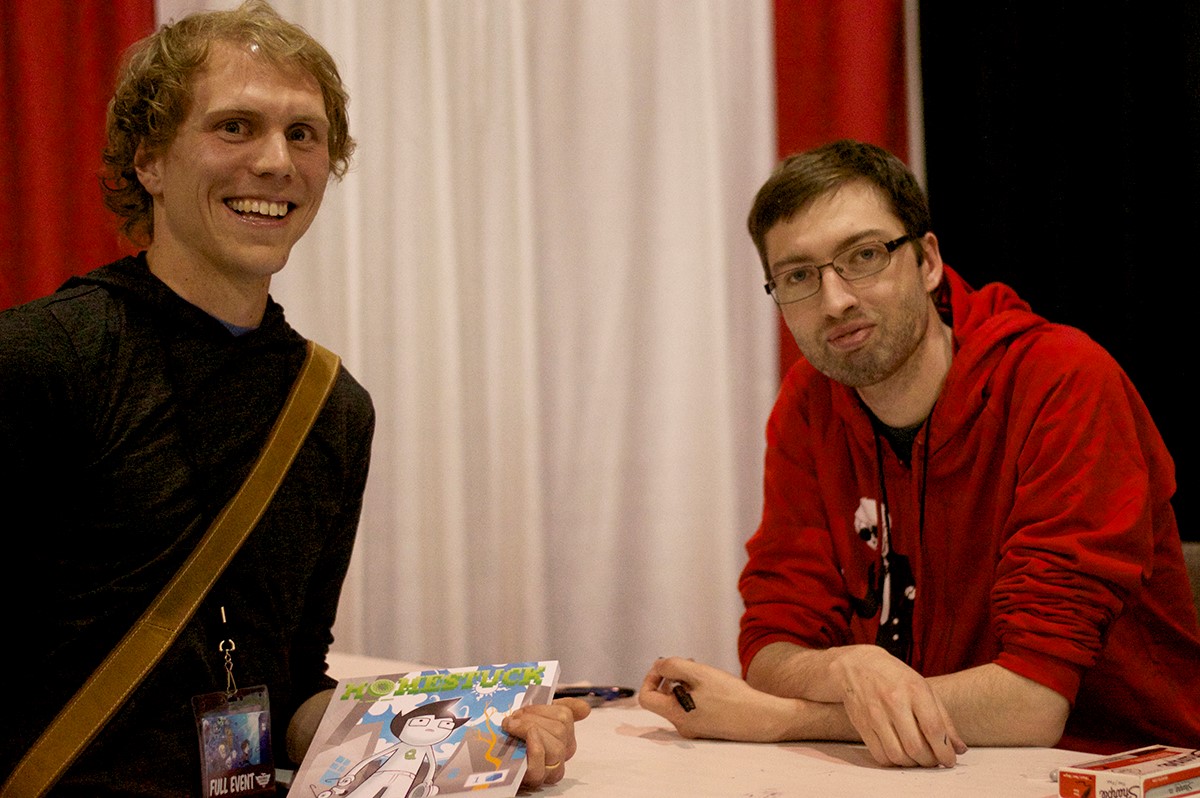 After the alarm was pulled, it was complete chaos and there were a lot of bad attitudes going around. We wondered if we should just skip the packed crowds waiting impatiently in the desert heat for the doors to be reopened for the final hour of the Con. But for some reason we decided to wait. That last hour ended up being the best of the entire weekend. Not only did Bryan get Andrew Hussie’s autograph, we ran into Vic and got another hug. We were giddy with geek awesomeness at this point, and stumbled upon a new friend, author and illustrator James A. Owen. 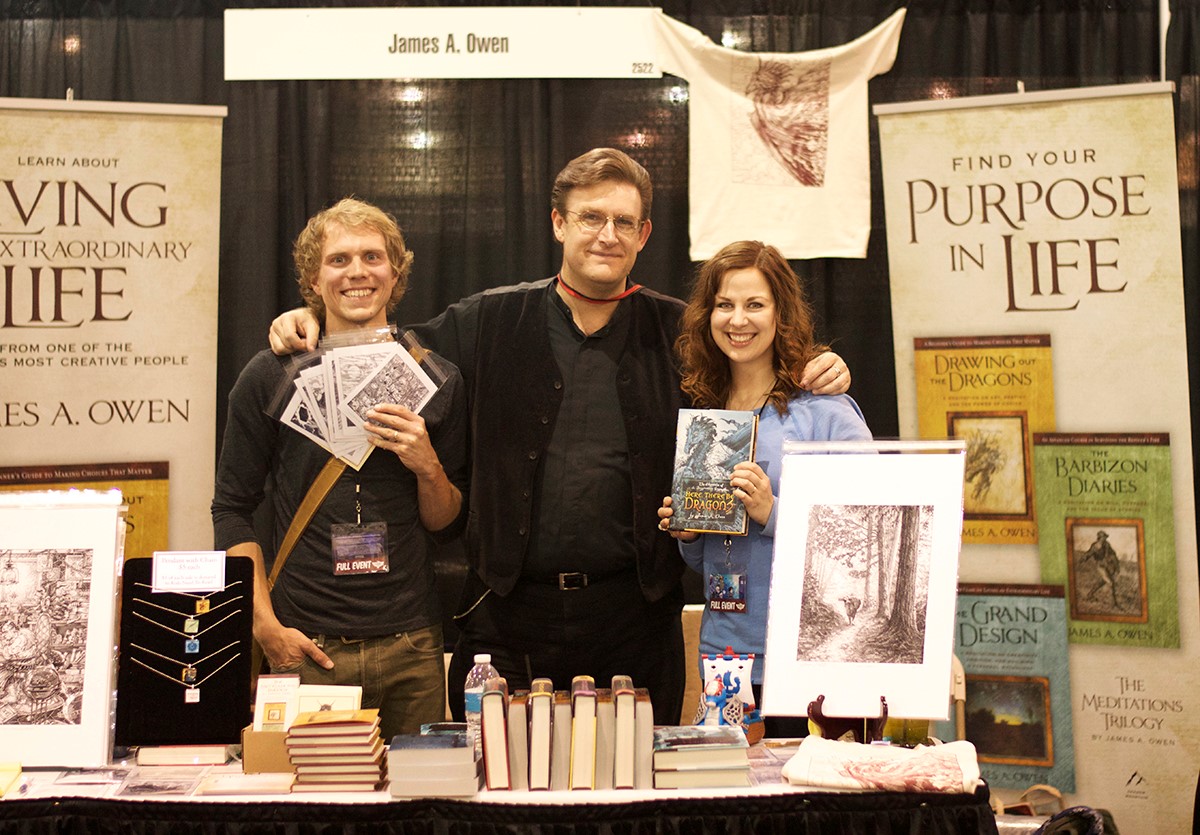 After talking with him and admiring his amazingly detailed pen and ink drawings we bought a copy of the first book in his series Here There Be Dragons. As he was drawing an original dragon portrait on the title page, we continued to admire his art. There was one print we really wanted to buy, but we were out of cash. As we were leaving, he not only gave us the print, but six additional prints of his illustrations! This time I didn’t leave my little jig inside.